Roads, Museums, and Ducks: Creating the Open World of The Division 2

Have you run into any ducks in The Division 2? Or done missions in museums or government buildings? If you have, then you have experienced the Open World Team’s work on environment art in the game!

We sat down to talk with Karen Stanley and Sonja Christoph – two of the Environment Artists on the team – about their work on the game, the challenges of summer, and how to add humor through the environment.

Karen Stanley and Sonja Christoph are both part of the team working with the open world elements of The Division 2 – including the exploration areas and the other hidden spaces that you might find between missions, as well as also side missions, Control Points, resource nodes and Living World Activity locations.

“We build roads, bridges, and construction sites, but also buildings and interiors … in some ways it’s almost like we’re civil engineers and interior designers,” says Karen as we sit down to talk about their work on The Division 2.

For Karen, working at Massive is a dream come true. She first applied five years ago, fresh out of university, but fate brought her to another studio. When work on The Division 2 started, Massive got back to her offering a job.

Sonja has a background in the US film industry, and she was drawn to Massive’s philosophy to push the limits to create the best gaming experience possible.

“When I played The Division for the first time I was impressed by the attention to detail, sense of atmosphere and mood. It felt finely tuned, like the cinematography I had grown accustomed to in the film industry. I wanted to get the chance to fully explore the worlds we create instead of just showing a glimpse of them,” says Sonja.

Working on The Division 2 has provided several new challenges for the Environment Artists. Both Karen and Sonja agree that one of the biggest differences has been the change from winter to summer.

“In the first game, the roads were all covered in snow, which means that we now with the summer setting have to work much more with the roads since they are actually visible in the game,” explains Karen.

“Another important aspect of the game that has been affected by the change of seasons is the colors. With summer comes more colors, and it has really been a balancing act to not make it too saturated. More colors also means that we have to think about people with color blindness. Red on green is for example a no-go, which is a challenge with all the greenery. But we have someone in our team who is colorblind who can tell us right away when something isn’t working, which is great.”

One thing that has made life easier for those working on the project has been the improved Snowdrop engine, which according to both Karen and Sonja has made their work on The Division 2 “so much more fun”.

“Creating a 1:1 version of Washington, D.C. has been a nice and smooth experience,” says Karen, and continues:

“We have the base in reality, and then Level Designers create the space to play, and we contextualize it in the world. It obviously requires quite a lot of research done by our amazing research team – not just when it comes to the environment but also the motivations of the people in the game in these specific spaces.”

Adding humor to the game

Every area of the game has its own theme set by Art Direction, and the Environment Artists are then assigned different areas work with.

“Understanding the art direction for each area really allows us to push it with our own inspiration and even personalize it. We all try to add some jokes here and there, and if you look closely, you can almost see who has worked on which area. We all have our unique propping styles,” says Sonja. 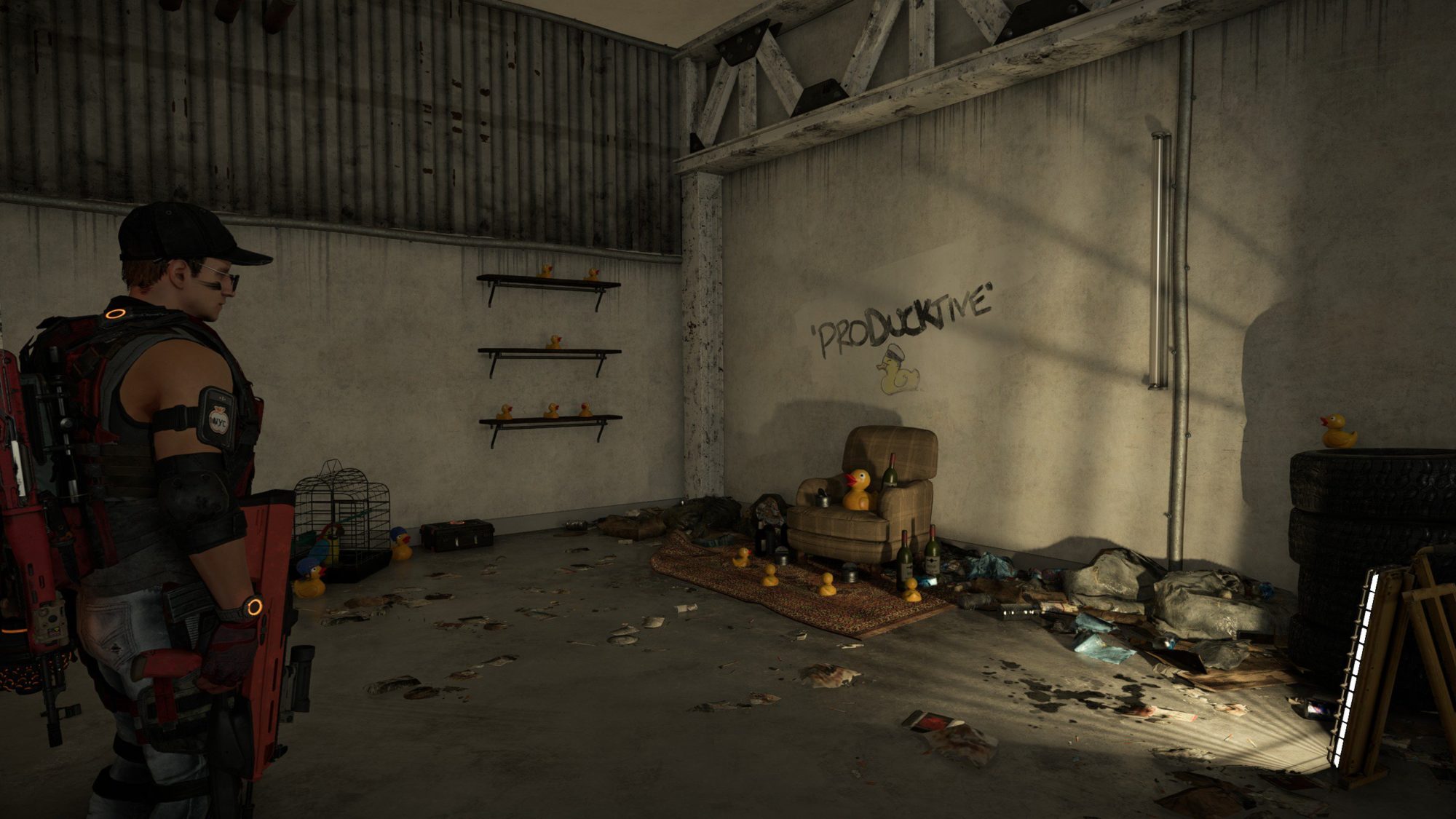 “One fun thing we came up with in the team was to put ducks everywhere,” says Karen laughing. “You can see them in the beta build and it became this huge thing among the fans, it’s so much fun! I think they even created a website for duck-spotting in the game.”

Both Karen and Sonja notes that it’s a fine line between forcing these props and jokes into the game and actually making it fun and believable. However, they both agree that adding some humor to the game is vital.

“You got to remember that there are still people inhabiting this world. They are rebuilding this broken city, and I truly believe that they would at least try to have some fun while doing it,” says Sonja.

“It’s amazing to see it all come together. To create and present Washington, D.C. in this different setting and then see what people do with it – it’s a feeling like no other,” says Karen.

“It feels a bit like you’re building a home for people, and then they move in with their own furniture and decorations and they start using the different rooms in ways you didn’t expect them to. That’s what I love the most about what we do,” concludes Sonja.