Did you know that the technology behind mobile game Just Dance Now actually has its roots in an in-game companion drone for The Division? We sat down with Online Technical Director Björn Törnqvist to find out more about the history of the tech fueling the game.

When The Division launched in 2016, a planned feature had been a drone that would be controlled by a separate player on a tablet or phone, playing with others on consoles or PC. In the end the feature had been cut from the final game due to technical constraints and unreliable internet connections. But the concept lived on behind the scenes, and would serve as the inspiration for the technology that ended up fueling a game in a completely different genre than The Division…

“Companion gaming (i.e. phone apps that complement the console experience) was all the rage back then,” Online Technical Director Björn Törnqvist, who worked on the technology behind Just Dance Now, tells us.

For example, Assassin’s Creed: Black Flag had a companion app, showing maps and keeping track of your pirate fleet, and Destiny had its Destiny Companion where you could read lore and change your in-game gear. But the drone was supposed to be an active participant in The Division, in real time, which made everything much more complicated than more passive apps working as complements to their respective games.

“Phone networks back in 2013 were bad, and Wi-Fi was often spotty with interference from microwave ovens among other things,” Björn notes.

But that didn’t stop him.

Phone networks back in 2013 were bad, and Wi-Fi was often spotty with interference from microwave ovens among other things.

“I was determined to see how we could overcome those challenges in order to make a seamless real-time companion app that ‘just worked’ wherever you happened to play or watch the game being played.”

While the drone feature didn’t work under those circumstances, Björn just couldn’t drop the idea. He wanted to keep pushing the capabilities of phones, mobile networks, and – in his words – “the generally messy situation of consumer wireless communications”. At this time it was not uncommon for phones to drop down from 3G to 2G, which meant that suddenly only a couple of kilobits per seconds of data would come through. When that happened, the kind of companion app the drone was supposed to be would stop functioning as it should and would cause a lot of frustration for the user.

Working on the tech as a hobby in his spare time, Björn eventually got it working. He grabbed a camera and recorded a video of the result – a couple of devices connected over different networks blinking together in perfect sync.

“I was so happy with the result that I forgot to remove the baby bottle I’d used to feed my newborn child earlier,” he says laughing. “Of course, that is what people remember the most from the video!”

The impressive video, of devices blinking together like synchronized disco lights, is now known as the “baby bottle video” (“nappflaskefilmen” in Swedish) within Ubisoft.

A few players in a room playing together is one thing. Björn had bigger ambitions than that. After all, if the tech worked seamlessly over different networks, even more players could connect to the same game. A lot more players.

“When I finally got it working and had perfect sync with low sensitivity for latency and super-low bandwidth needs, I realized that this could be used for a more ambitious scenario than just a couple of players in a sofa,” Björn says. “What if ten thousand players in an arena used the tech at the same time? What would that look like?”

With the tech he had created, which actually could support a scenario like that, an idea struck him. Just Dance would be the perfect candidate.

“It was already a fun and popular game on consoles, and it was the perfect game to build upon! With that game, and this tech, it was feasible to support thousands of players playing together, at the same time, in an arena. That’s crazy cool!”

Armed with only his phones, and with Massive’s blessing, Björn headed to Paris to show off his invention to the Just Dance team.

With that game, and this tech, it was feasible to support thousands of players playing together, at the same time, in an arena. That’s crazy cool!

“The cool thing with Ubisoft is that these types of initiatives are encouraged”, Björn says. “It’s funny that I came out of nowhere with a demo of phones blinking in sync and telling them that this could expand Just Dance beyond consoles to huge multiplayer events and being available on any internet-connected screen. All you needed was a mobile phone that acted like a Wii-mote.”

“I’m grateful they trusted me and welcomed it!”

The team in Paris loved what they saw, and the project that would become Just Dance Now was greenlit.

An excited Björn returned to Malmö and, together with people like producer Oliver Merlöv, started to set up a team. Björn acted both as technical and creative director for the project.

“We set up a team at Massive that made the end-to-end tech from online to the mobile apps, with screens available on web, SmartTVs, Chromecast, iPads, and AppleTV”. The choreography, songs, brand and business model were handled by the team in Paris. 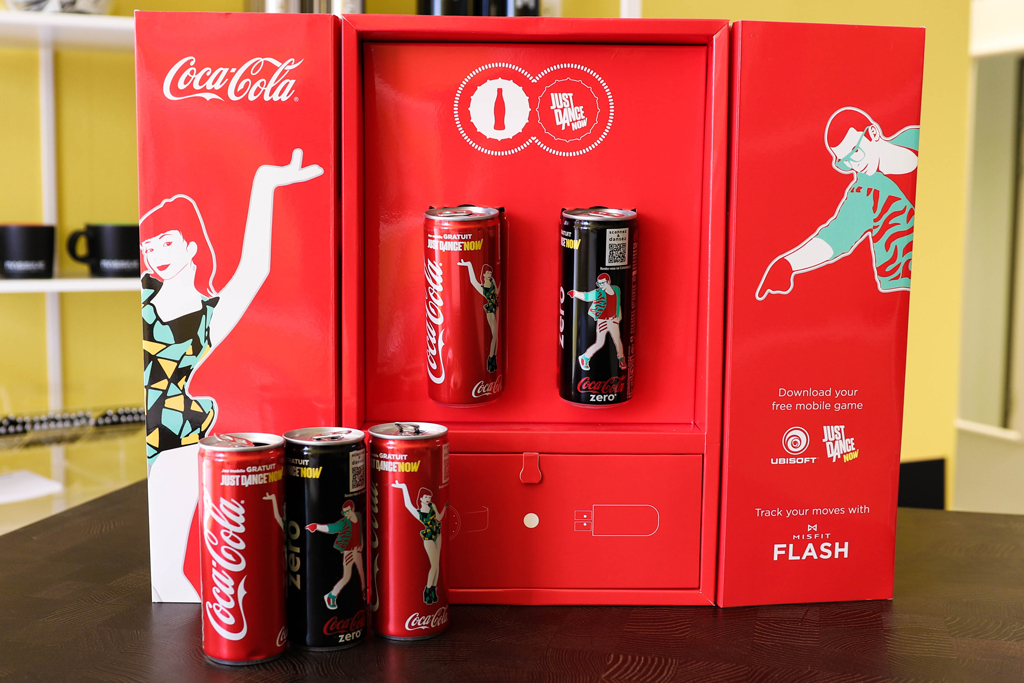 And while we sadly can’t show them to you, there are some interesting videos of meetings and play tests happening at the office, with Massive employees dancing together in front of big screens. At a studio that at that point had mostly worked on games like World in Conflict, Far Cry 3 and The Division, that had previously not been a common sight.

The result was, to quote the launch trailer, “a revolutionary dance experience”. The game released on September 25, 2014 and became a huge hit. It came installed on the first generation of Chromecasts, Coca Cola got involved and made special promotional cans and it turned up in arenas such as the Staples Center in Los Angeles. A flash mob sprung up at Piccadilly Circus in London. Millions of people have downloaded it on their phones.

Back home in Malmö, thousands of people turned up and Just Danced in front of the big stage at Malmöfestivalen, the annual city festival.

Did Björn expect it to become such a huge success?

“Honestly? Yes, I did”, he says with a smile. “The core game is great with a broad appeal, and this tech helped it break out of the console space.“

Asked for one of his favorite memories from the development of the game, Björn looked back at the reveal at E3, 2014. That’s when Executive Producer Jason Altman – now Senior Vice President at Ubisoft’s Film and Television department – presented Just Dance Now for the first time.

“I’m a big believer in the power of demos when it comes to online tech,” Björn tells. “When we revealed Just Dance Now to the world at E3, we had 40 dancers on stage, and they were all dancing with iPhones and being scored in real-time.”

As anyone who has attended E3 – or any larger conferences – knows, with hundreds of journalists in attendance, the Internet connection can get spotty at best.

When we revealed Just Dance Now to the world at E3, we had 40 dancers on stage, and they were all dancing with iPhones and being scored in real-time.

“It was the first real proof that the tech could work on super-bad network and Wi-Fi connections! And it did work, and I’m both relieved but also, in retrospect, astonished that I pushed for a live demo. I don’t think anyone realized the demo was live!”

If you look closely, you can see both Björn and Oliver in the background, dancing on stage behind the professional dancers. See if you can spot them!

Feel a sudden urge to dance after seeing that video? Just Dance Now is available on App Store and Google Play. New songs to dance to are still being added. What are you waiting for? Just start dancing now.